As a lay person, attending the Passive House Conference in Christchurch was a daunting prospect. After all, the Passive House system relies heavily on data, modelling and real science (yes physics!), an approach which is hard for me to get my intuitive and non-scientific brain around. However, the weekend was fascinating and I came away feeling energized by the breadth of knowledge, experience and enthusiasm on display.

So that this blog post doesn’t turn into a snore fest, here are some brief impressions and standouts gained from the talks and from, well, just being with people who are passionate about raising the housing/construction bar.

The visit to a certified Passive House under construction in St Martins offered the physical experience of looking into what goes into making a house Passive. I guess it boils down to three elements; PH certified windows (the certified windows used in this house were produced by Thermadura in Mosgiel), a mechanical heat recovery unit and a well-insulated building envelope (prefabricated panels by Theca) designed to eliminate thermal breaks. Even though this house is still in the construction phase, talking to the owner, one could sense his excitement. Because the panels were constructed off-site, the shell of the house went up very quickly. (Post script, this house has just been certified Passive House+ – the first in the South Island.) 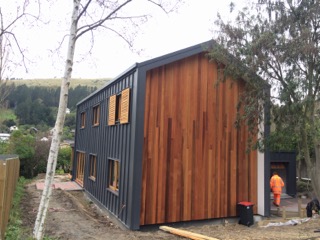 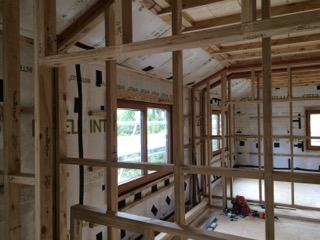 I only attended one day of the conference so I can’t comment on Saturday’s talks however the various speakers on the Sunday looked at the Passive House system from a variety of experiences. Andrew Michler in his talk, The Passive Insurgency, encouraged us to become Passive Jedis – to take the message of fabric first to the public. As he says, the stories behind these builds are exciting and energizing. His own story, building the first certified Passive House in Colorado (using basic materials with minimal toxicity in an area which has very harsh winters), is inspiring. However, he impressed upon us the urgency of this insurgency. Incrementalism is no longer an option if carbon emissions are to be reduced to a level that sustains life as we know it on this planet. Given that building/construction is the largest carbon producer in the world, it is important that buildings are built for longevity. It accounts for 40-50% of carbon emissions both in the construction phase and during occupation (building usage).

Enrico Bonilauri spoke of a Passive House EnerPhit (retrofitting an existing building to a slightly different standard) in Italy. Italians by and large do not see their houses as ‘cash cows’. Rather, the average Italian house changes ownership roughly every 50 years. That factor, coupled with an ability to deduct the cost of carbon emission remediation against income tax, made the masonry retrofit (built in 1962) of a “tough guy with weak ankles” (the structure was sitting on walls one brick thick) an economic proposition over the life of the building. The owners of this building will be able to claim roughly 100k euros in income tax deductions over the next ten years. This has made the baseline budget of 225k euros easier to swallow.

Enrico made the point that if you build or retrofit a house to a low standard, you are locking in energy inefficiency for decades to come.

Jessica Grove-Smith from the Passive House Institute in Germany echoed Enrico’s call for standardizing componentry and working to improve existing housing stock. To this end, the Institute have developed the EnerPHit standard for existing houses, Passive Haus Plus and Passive Haus Premium which include points for using renewables and low energy materials.

Jessica talked about having a strategy at the beginning of the building project deciding whether to do it all at once or carrying out the retrofit in phases. The Institute, while maintaining rigorous standards for the Passive House system recognises that in many areas where there is limited availability of certified componentry or small houses in shaded or cold locations, Passive House certification can be hard to achieve resulting in many “near misses”. They are currently working on how to mitigate this issue with the various Passive House branches around the world.

Barry McCarron’s talk moved away from the domestic to talk about CREST – the Centre for Renewable Energy and Sustainable Technologies in Northern Ireland. This building has met not only the Passive House standard but also the BREEAM Excellent and Net Carbon Zero certifications. As Barry says “The CREST pavilion building has the purpose of being a demonstration building for pioneering design principals and construction methods. It is an exemplar for other construction schemes”. Barry did make the point that it is important when building on this scale that a contractor who has had previous PH experience is hired and this was a challenge for the project.

What impressed me on the day I spent ingesting what I could about Passive House, is that this is not a system which is just for the domestic market. Schools, offices and public buildings could/should all be built to PH as a standard. Schools especially would benefit long term from having minimal energy costs especially over the winter period. The first thing that strikes you when you walk into a Passive House is just how good the air quality is. There are no marginal rooms, cold patches or stuffy areas. One can’t help but feel that this element alone could do wonders for student concentration in schools. That would be such an interesting study to undertake……

For those of you interested in experiencing just how good Passive Houses are, there are often open days held around the country. Check out www.phinz.org.nz for details.